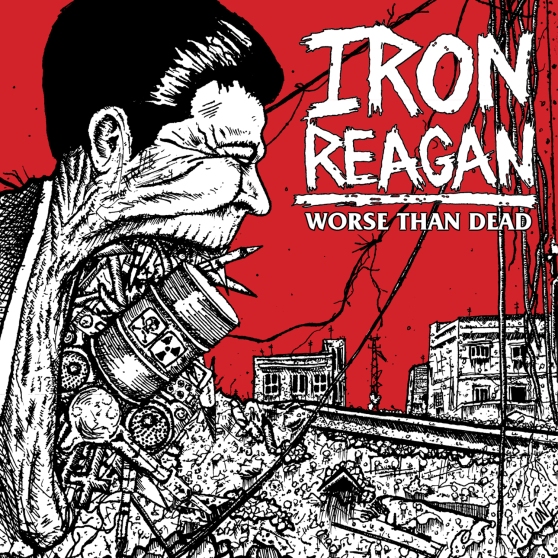 In a short span  of time  A389  records  have proved to be  a  force to be reckoned  with when it comes  to extreme  music, Hardcore especially. From  signing veterans  of the genre  like Integrity,Pulling Teeth , Gehenna ,Eyehategod  and Ringworm to showcasing  newer talent like TRIAC,Full of Hell,Children of God, Weekend Nachos and even  pumping some  fresh new blood onto the scene like Cynarae,Seven Sisters of Sleep ,Homewrecker ,Sick Fix and Young and n the way. Iron Reagan is another  name   which  got added recently  to be amongst all these  talented bands.

Iron Reagan are a four piece super group from Richmond Virginia, consisting of members from Municipal Waste and Darkest Hour.  The band don’t really try to experiment too much nor try to keep pace with their contemporaries ,  this album right here is as old school as it gets, clearly fitting right inside the crossover thrash box. These  guys take  the  thunderous  palm muted chugs  of   Thrash  metal with the  simple yet intense chord play of Hardcore punk which brings out the best of both  the genres,  cutting out all the fat  and ultimately  creating  music  that’s simple ,straightforward  yet   energetic   and undeniably  exciting,  although there are times  when this album tries   to be a little more eclectic with the  tracks slightly out of focus and I ripped that testament a new asshole having a slight  black metal element to them  and paychech  showcasing a  metallic hardcore quality to their sound a la Integrity but for the most part this is just a full on assault.

So the final verdict? This album may not be a masterpiece, but is sure as fun as hell! ,  don’t  analyse to much just  put  on your thrash  metal jacket with patches  galore,grab some beer, crank up that stereo  and  BANG YOUR FUCKING HEAD!!

Stream the entire album below